This shop has been compensated by Collective Bias, Inc. and its advertiser. All opinions are mine alone. #UltimatePitStop #CollectiveBias Around here it’s been a mini construction zone for days. The kiddos have been busy repurposing toys, household items, and art supplies to create a little world for them to play in. This may look like any old kids’ project, but for them, and for our family, this isn’t just child’s play or a random assortment of things – this is how the siblings bond using Disney•Pixar’s Cars 3.

Interested in finding out what their newest Disney•Pixar’s Cars 3 love is? Hover over the photo to click through to Amazon.com to buy! If you know my older kids, you know they are exceptionally close, despite being different genders and over two years apart in age. They play together happily for hours and hours each day and for the most part agree on toys, activities, and things they enjoy. But, there has been one activity they have disagreed on since my son was old enough to communicate. I think everyone can remember when they first laughed, cried, and sung along with Disney's classic tale, Bambi. Whether that was 75 years ago when it was first released or it was on Disney Movies Anywhere just this past week, Bambi is one of those movies that touches your heart and stays with you forever. Lucasfilm’s first-ever standalone Star Wars adventure, ROGUE ONE: A STAR WARS STORY is out on DVD and Blu-ray today! I know from experience that the last few months have been torture for Star Wars mega fans everywhere. My son must have asked every singe weekend if he could go see "Rode One", and sadly our budget didn't allow for weekly screenings. But, then he happened to catch a commercial about the DVD release and it was all over after that. So, as for the probability that we would eventually one Rogue One? It was high. Very high.

Here are 10 reasons why you should own ROGUE ONE: A STAR WARS STORY:

Are you as excited about Disney's new live action Beauty & the Beast as I am? I remember seeing it in theaters when I was little and ever since then I've been in love. We're counting down the days until we take the kids to see the new Beauty & the Beast movie {yay! and shhhh! they don't know yet}. While we're waiting, I'm having fun putting together Beauty & the Beast-inspired collections. Doesn't this just make you happy? 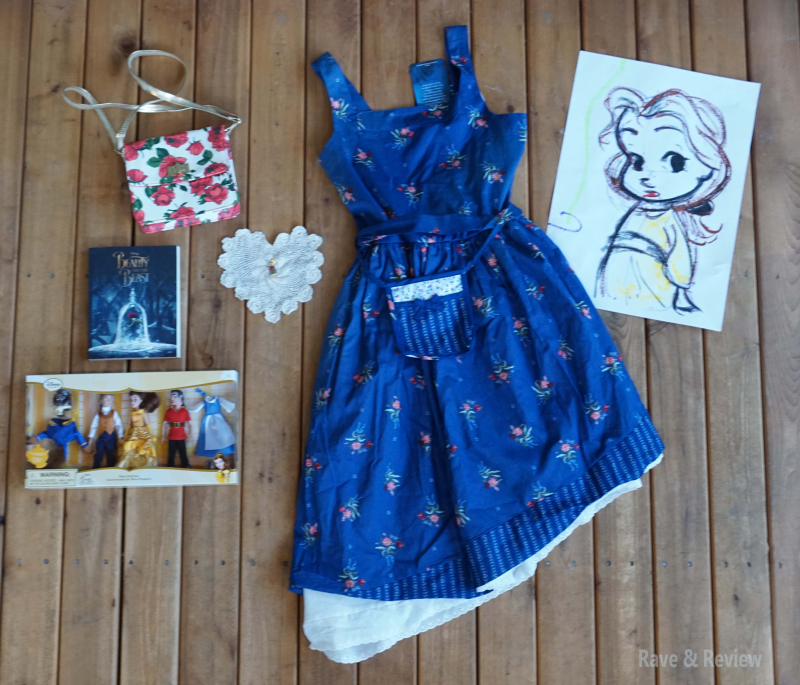 I love this little rose purse I found at Target, and I know it's going to be well loved with my little flower girls. Add in a book and it's just what Belle would wear. My daughter just got the book and she's already well into it. My little book lover, just like Belle. Remember when I told you not to wait to see Doctor Strange until it came out on DVD? Well, I hope you took my advice and saw it in theaters and then loved it as much as we did. And, I hope you adored it so much that you then were counting down the days until it was released on DVD so you could watch it over and over again. Like us.

We got to introduce our kids to Doctor Strange this week and their little minds were blown by the new superhero. “Is he a bad guy?”, “What are his superpowers?”, “Is he going to be okay?” So many questions. But, can you blame them? Doctor Strange is like nothing they have ever seen before, and a superhero like no other. As a parent, I loved them seeing a Marvel character that learned how to be a superhero. Rather than some accidental spill of radioactive material or a super power that comes on overnight, Doctor Strange just worked hard and studied. I loved his transformation from an arrogant and famous neurosurgeon who embarks on a journey to find healing. When his travels take him to Kamar-Taj, a mysterious enclave where he learns that there is more to the center than meets the eye, you see the true superhero emerge.

Pinocchio has always been one of those movies that I could watch again and again, so I’ve been waiting for the day that the elusive Disney vault would open and they would re-release Pinocchio on DVD and Blu-ray so we could purchase it {and finally rid ourselves of one of the last few VHS videos we still own}. Besides our own love for Pinocchio, it was also one of our Grandma’s favorites. After she passed away this last year we really wanted to share her love of Pinocchio with our kids, and were thrilled when Pinocchio was slated for a January 2017 release.

The Walt Disney Signature Collection release of Pinocchio is available January 31st, 2017 and includes hours of classic bonus material and exclusive features including a reinvented rendition of “When You Wish Upon a Star” created and performed by music influencers from Disney’s Maker Studios. It also contains never-before-seen artwork from the film’s Pleasure Island sequence and archival recordings of Walt himself during Pinocchio production.

Not familiar with Disney’s Pinocchio? Pinocchio tells the tale of wood-carver Geppetto’s beloved puppet who embarks on a thrilling quest – with faithful friend Jiminy Cricket – that tests his bravery, loyalty and honesty, all virtues he must learn to fulfill his heart’s desire: to become a real boy.

Are you worried there isn't enough time left to pick up thoughtful gifts for everyone on your list? Never fear, Seattle Premium Outlets is here to help and no one will ever have to know that you shopped last minute!

I'm sharing with you our gift guide for every age on your list. Every item was found at Seattle Premium Outlets this past week and is perfect for gifting this holiday season. Can you believe Christmas is less than a week away? It seemed like I had things under control and then late last week I checked I still had a dozen of presents left to buy and the days were flying by. Instead of stressing out, I decided to take an afternoon off and head up to Seattle Premium Outlets in Tulalip, WA for a day of shopping, meeting up with friends, and ultimately, crossing off my list once and for all. Baby and I set off on an epic shopping trip that started with meeting up for coffee with a long-lost friend, and then ended with her falling asleep clutching an empty Coach shopping bag, a Tigger bracelet, a handful of stickers, and a notebook – all of which were given to her on our shopping trip for being such a delight. We stopped by guest services where we were greeted with beautiful holiday decorations on the fireplaces flanking the food court. This is where you can pick up mall gift cards as well as shop their huge selection of restaurant, store, and experience gift cards at the gift card kiosk. Lucasfilm’s highly anticipated, first-ever standalone Star Wars adventure, ROGUE ONE: A STAR WARS STORY is in theaters today! So, I bet you’re wondering what the probability is that you will like Rogue One? It’s high. Very high.

In an effort to be surprised by the film and not have it ruined by spoilers or fan theories, I have stayed away from social media for the past few days after the LA premiere. Waiting until I got a chance to see it this week at a prescreening in Seattle was torture, but I’m happy to say that I went in knowing absolutely nothing about the film other than the character’s names {which I couldn’t shield myself from since they are fully saturating the toy department and have been for weeks}. That being said, I do wish there were a couple of things I did know going into watching Rogue One, and they are as follows: