Walt Disney Animation Studios’ Moana tells the story of a spirited teenager who disobeys her parents and sets sail on a solo daring adventure to save her island and her people. Inspired by stories her grandmother told her, Moana’s mission is to restore the Heart of Te Fiti, a magical stone stolen years ago by the demigod Maui.

Directors Ron Clements and John Musker say the story of Moana was inspired by the great explorers who masterfully navigated the vast Pacific, discovering the many islands of Oceania. “Voyaging is a real source of pride for many Pacific Islanders, a part of their identity,” says Clements. Many experts believe that about 3,000 years ago, those deep-sea exploratory voyages halted for about a millennium before resuming. This rebirth of exploration sparked the filmmakers’ imaginations, and the heroine at the heart of the story. “The idea of a teenage girl who dreamed of becoming a navigator—considering the abilities of her ancestors—was so appealing,” explains Musker. Moana’s quest to become a wayfinder also serves as a journey of self-discovery, empowering her to find her own identity, a beautiful and powerful message for audiences of all ages and genders.

Moana is 90 minutes long and available now on Blu-ray 3D, Blu-ray, DVD and On-Demand and can also be found on Digital HD/3D and Disney Movies Anywhere {DMA}. You can also keep up with all things Moana by connecting with the film on Facebook and Disney Animation on Twitter and Instagram. Be sure to visit the link below to find somefun crafts and activities! 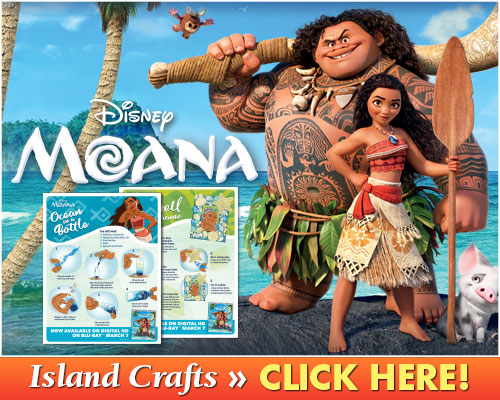