The MAXIMUS Smart Security Lights featured in this post were received for review. All opinions are 100% ours and no form of monetary compensation was received in exchange for this Rave Review. In the past few years, our neighborhood has been the target of some really annoying thieves. Not only did they steal my daughter’s birthday present one year, a stack of gift cards the next, and a bunch of stuff from our vehicles, they have also been known to smoke in my vehicles, dump everything out onto the seats and ground, and basically cause havoc while stealing our stuff. Because of this, we have tried many {many, many} camera systems in order to find one that works for us and isn’t obtrusive when installed.

When I found MAXIMUS at CES, I knew I found our solution. I had a long list of must-haves for our front-yard surveillance that I had compiled after my years of trying new camera systems. I was shocked when MAXIMUS checked off all of my must-haves and even offered options and services I hadn’t thought of yet. The Smart Security Light also has two-way talk so you can engage in live conversation or play a message every time someone is detected. Add in the fact that it’s easy to install and doesn’t require an electrician or damage the exterior of your house, and it’s not hard to see why we love it so. Remember when I said that I’ve tried numerous camera systems in the past? Well, I’ve tried so many that they all tend to blend together. But, pretty much the only thing we haven’t tried in terms of cameras is a fixture piece that mounts to the house because doing something like cutting into the siding just seemed so *permanent*. So, while we have had numerous outside cameras, the wires were always exposed, or we had to go with the wireless version that also has its own drawbacks and requires regular battery replacing in order to work correctly.

But, not the MAXIMUS Smart Security Light. Since it simply replaces the existing fixture{s} on your house, it doesn’t require anything more than a few minutes time and a basic understanding of electricity. Everything you need is in the kit, including the spacer tool, the hook, and even the light bulb, and the step-by-step instructions walk you through every step thoroughly and easily so even a newbie could handle the install. So much more than just a pretty light

Yes, it’s gorgeous looking. But, it’s also so much more. If it wasn’t such an awesome fit for the decor of our house, I probably wouldn’t have looked twice at it as I passed the CES booth. But, once I glanced again, I realized that I wasn’t just looking at a smart light, this was a smart camera light that could make monitoring our home as effortless as unscrewing the existing fixture and replacing it with a MAXIMUS.

Or two MAXIMUS lights, as the case may be. If you have two light fixtures outside {commonly found on either side of the garage or flanking an entryway}, replacing just one would look silly. That’s exactly why MAXIMUS created the MAXIMUS Companion Light for their Smart Security Light, that allows you to get a matching fixture without the internal camera. This not only makes sense from a cosmetic standpoint since having random-looking lights would certainly detract from a home’s exterior, but it also makes good financial sense since you don’t have to pay for an additional camera you don’t necessarily need. Once you have your light{s} installed, you’re all ready to monitor your home in the smartest possible way. MAXIMUS Smart Security Lights detect whenever someone is approaching your home, then sounds a tone, beep, or plays a message to let the person know that they have been detected. While it’s doing all that, it’s also sending a simultaneous alert to your smartphone or app-enabled device notifying you that someone has been detected. At this point, you can engage in a live conversation with whomever it is or you can sound an alarm – all from your smart phone. Whether a delivery has arrived, a stranger is at your door, or your child has just arrived home, the Smart Security Light gives you peace of mind wherever you go. Automagic. With the MAXIMUS Smart Security Light, you can turn the light on and off remotely, set up a schedule, automatically turn on and off the light in dusk-to-dawn mode, or you can have it activate in response to motion. After 4 years of not working, we had *just* installed the new porch and garage lights timer and then weeks later it was obsolete. Why read a manual and re-program your lights by the season when you can just automatically turn on your lights as the sun sets?

High-Definition 720p zoom camera. We’ve tried numerous camera systems where figures and shapes are almost unrecognizable, so the quality on the MAXIMUS blew our minds with how clear and sharp everything is – even at night. 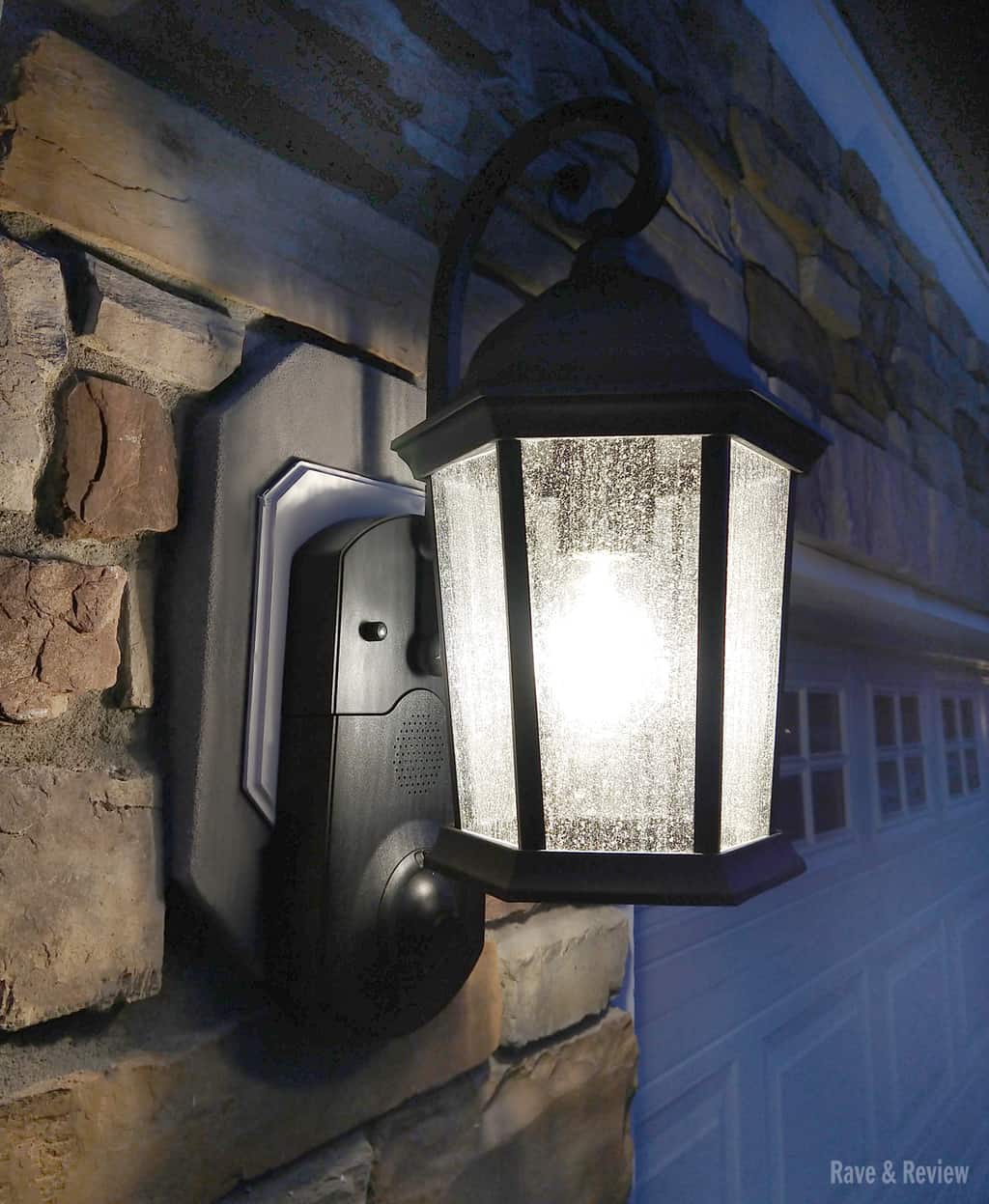 Hi-fidelity speaker. With its clear audio and loud alarm, you can speak in real time or you can use pre-recorded messages right through your MAXIMUS light. I’m kind of embarrassed to say how many full conversations we have had via the MAXIMUS Smart Security Light in the month we’ve had it installed. What might seem like a novelty feature to some has become one of our favorite parts of the camera. With our young kids who are far from cell phone age, but who love to have a little independence, the two-way-talk is a great way to keep in touch with whatever parent isn’t home with them. I can see us using it even more as we get to the ages where the kids will walk home from school with friends and we need to quickly give them a message. PIR and smart motion sensor technology. We’ve had far less superior cameras that alert me for shadows crossing the yard, cars that slow down, or my favorite alert – the reflector on the kicksled that went off for over a month. But, after a month of use, I haven’t had one false MAXIMUS alert that wasn’t actually something in the yard or driveway. Accurate detection is a big huge deal to me, so this alone sells the MAXIMUS lights in my opinion.

Cloud-based data storage. You can choose between the full monitoring via the Kuna app for a small monthly charge that allows you to save videos and recall footage over a large time frame, or you can use the free Kuna service that shows you a smaller window of time and only allows you to save a limited number of videos a year.

You can get your MAXIMUS lights at Costco, The Home Depot, Lowe’s, ACE, The Mine, Bulbs.com, Bees Lighting or ALB. You can also buy right on the GetKuna website for easy shopping.