If you have a little girl, chances are that you have heard all about American Girl’s newest release. Introducing Luciana Vega, the 2018 Girl of the Year. Rumors had been swirling around that the Girl of the Year had an awesome space-inspired story, and yet again American Girl did not disappoint. Luciana is an 11-year-old girl who dreams big and would love to be the first person on Mars. In creating her storyline, American Girl did their research and worked directly with NASA, including a team of advisors {scientists, astronauts, and more} that helped ensure the accuracy and authenticity of Luciana’s world.

The Luciana™ 18-inch doll features warm brown eyes, medium skin, and dark brown hair with an awesome bright purple streak to show off her creative side. She comes with her first book and is dressed in a brightly colored celestial-inspired dress, silver boots, and a red belt with pouch for storing small accessories like her included necklaces. And, that’s just what she comes with in the box.

Luciana’s world also includes a whole host of amazing accessories that any science-loving kiddo would love. 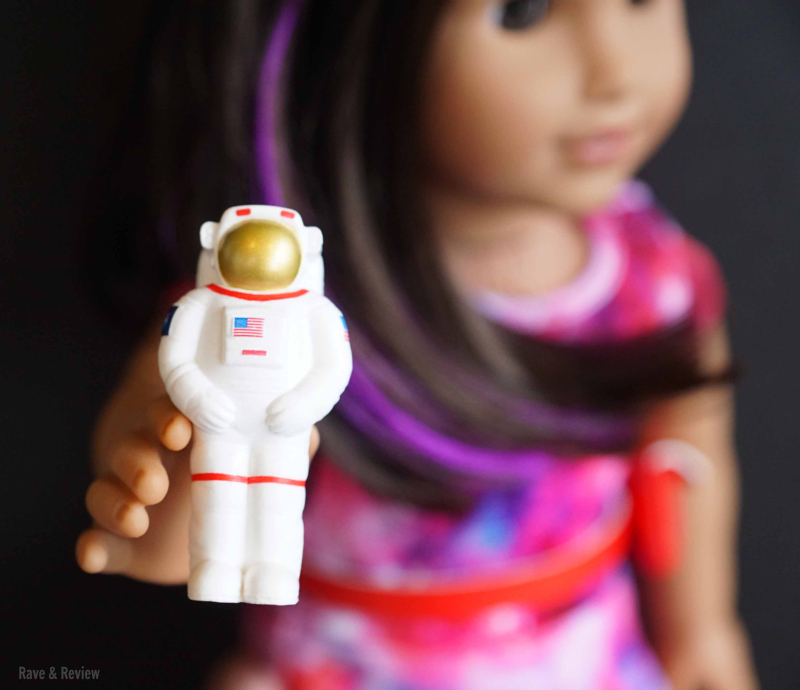 When I say amazing accessories, it really isn’t an exaggeration. We’re talking gems like Luciana’s Mars habitat that includes so many activities and play value that my kids could play with it for days without ever stopping to sleep or eat. From her own laptop, growing station, science lab, VR goggles, research essentials, and a whole bunch of experiments that let kids learn about space, I love that they are drawn to the Mars habitat and each time we visit it they come away with more questions and observations. On our list of things we will get before year-end is Luciana’s Maker Station that includes Luciana’s building supplies, a terrarium, tools and of course her robot dog {yes, I said robot dog!}. Since her collection is based around her Space Camp® experience, she has a set that is from her visit to the NASA store and another set with her camp accessories so you can play camp at home. The “I need some space” tee is from our in-store event where we learned about moon cycles, outer space, and all things Space Camp while checking out the new doll. But, the one thing that absolutely sold me on her collection? Luciana’s Space Suit. As soon as I saw that Luciana had her own Space Suit, I was smitten. I had imagined that the Space Suit would be pretty nice, but nothing prepared me for how detailed and realistic it feels and looks in person. Since my kiddos have rocked their Aeromax space suit for years for special events and imaginative play, I knew immediately that we would end up with a Space Suit for our Luciana and friends.

Her collection also includes a great Flight Suit that looks just like the real deal, a space-themed pajama set, a telescope, and more. We were at the American Girl store for Luciana’s launch day and the excitement for her release was like nothing I’ve seen before. Just about ever other girl in the store had a NASA or space-themed accessory and it felt like every other little girl was leaving with her own little Luciana doll and/or accessories. Let me tell you, it was *incredibly* popular when the kiddos went to the Luciana event in full space attire. And, it was incredibly popular with our kiddos when we ended up doing a birthday lunch at the American Girl cafe. A Luciana-inspired birthday cupcake {and doll-sized cupcake, seen below} was just about too much excitement for our birthday girl, and she has been talking about it ever since. Aside from the adorable doll and her out-of-this-world accessories and playsets, we love Luciana’s story that was written by Erin Teagan. In putting together her story, a team of American Girl editors and product designers visited Space Camp and NASA’s Johnson Space Center in Houston to gain insight into a day in the life of a Space Camp trainee—from putting on space suits and learning about the “right” way to eat in space to conducting a mission in micro-gravity. After Luciana wins a scholarship to Space Camp in Huntsville, Alabama, Luciana is thrilled to launch her dream of landing on Mars. But as she ascends from Space Camp kid to youth astronaut trainee, she faces many challenges that test her competitive spirit and self-confidence, and she must find the courage to embrace the unknown with bravery, curiosity, and wonder. 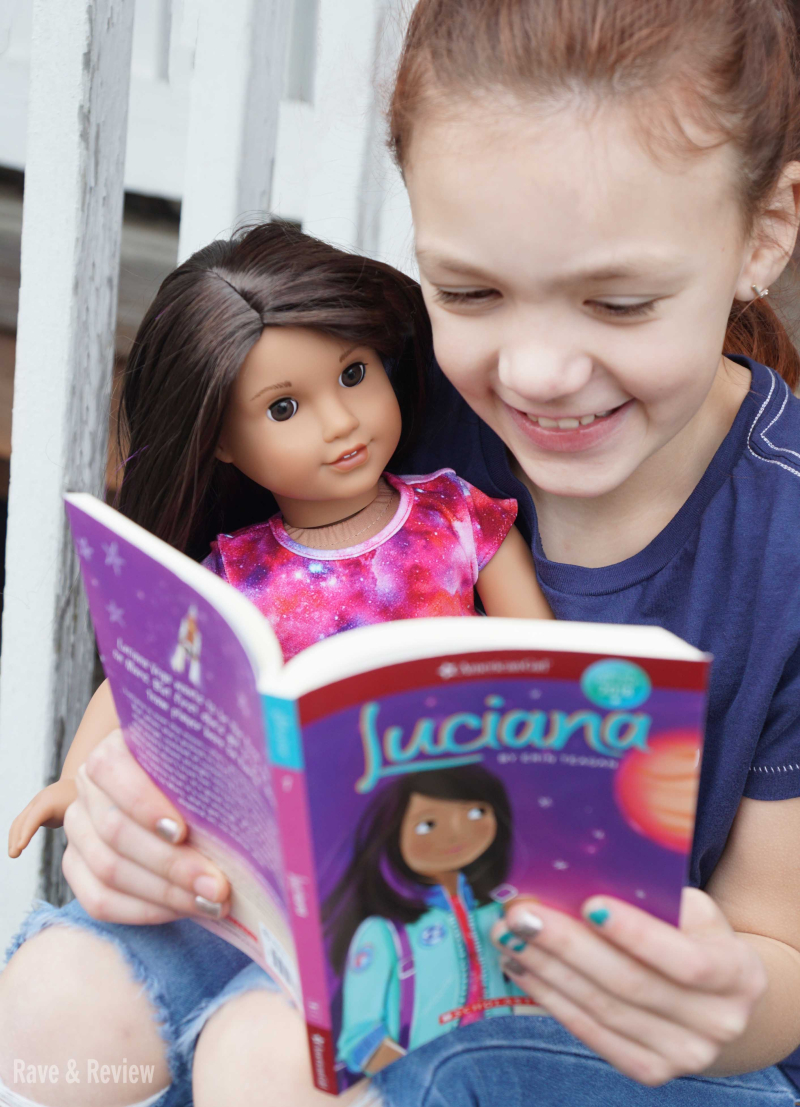 We have just started reading her first book together but I already love her story of chasing her dreams through trials and tribulations, and I appreciate how it teaches young girls to never underestimate their infinite potential to change the world. Luciana’s story shows that creative thinking, collaboration, and STEM literacy provide opportunities for meaningful growth and development and girls should be a big part of that process. Since technology continues to revolutionize our world and is playing a role in education at even younger ages, Luciana’s release is especially timely. Seeing a girl go after her dreams and achieve her goals to participate in Space Camp helps bring visibility to girls in science, which I think is extremely important. American Girl’s partnership with NASA was developed through the Space Act Agreement to inform and inspire the wider public {and especially young girls} about the excitement of space and STEM careers. Introducing girls to the world of STEM-based educational programs by way of Luciana’s story and accessories makes me so happy and I hope it gets my kiddos dreaming about the possibilities of space, science, and of aiming high.

Since my kiddos have been science-obsessed for years now, I love that they now have a doll that they can play with while they research, experiment, and record their science observations. Learning all about space in particular has always been my oldest’s passion, so seeing her two passions combine in Luciana Vega has been really fun. We’re in the process of building Luciana a science lab at out house where her Maker Station will eventually live, and I’m incredibly excited to see it come together.

To further engage girls and boys with Luciana’s message, American Girl—in partnerships with Scholastic, NASA, and Space Camp—has funded Blast Off to Discovery, an educational program to help third though fifth-grade students explore the wonder of space through Luciana-inspired content, including STEM-based lesson plans and classroom activities, videos, a game, and more. The program will be available on scholastic.com starting February 5, 2018. In addition, American Girl and Scholastic will host a Mission to Mars Sweepstakes where families can go on a series of weekly missions for a chance to win several prizes, including a grand prize trip to Space Camp valued at over $2,000.

Create your own Luciana backdrop:

This is a super easy DIY that you can make to enhance your Luciana play. We made our own “space” backdrop for our pictures of Luciana in her space suit and the kiddos absolutely love it. You need: pointed scissors, black foam core board, tape, and a strand of battery operated lights. Simply poke a small hole in the black foam core using your scissors, insert one LED light, then tape it up on the back so it stays in place. Continue placing lights until your strand is gone and you have a faux starry sky to play with. Optional: poke several small holes in the background so ambient light can shine through the foam core – this creates a fuller and deeper look to your space scene that I loved. And, here’s the back of the black foam core so you can get an idea of how simple this DIY is. Girls can visit play.americangirl.com/play/girl-of-the-year/luciana/ to read excerpts from the Luciana books and enjoy fun space-inspired activities.

Fans can step into the worlds of Luciana and their other favorite American Girl characters and experience their stories in a whole new way. The app is available to download later in January through the Apple App Store, Google Play, and Amazon Kindle.

Girls and their families can train just like astronauts—including taking a tumble spin in the Multi-Axis Trainer and designing a robot—at a special Girl of the Year experience created in partnership with Space Camp starting in summer 2018. American Girl is also sponsoring 20 scholarships to attend Space Camp. To learn more, visit americangirl.com/meetluciana. 6 thoughts on “Explore worlds unknown with Luciana Vega, the 2018 GOTY from American Girl”