This shop has been compensated by Collective Bias, Inc. and its advertiser. Kid-friendly cereal sushi ideas and images are mine alone. #StockUpWithPost #CerealAnytime #CollectiveBias

My kids love helping in the kitchen, so I love thinking up creative snacks that they will be excited to make and eat with me. I was trying to think of something fun we could make together this fall that will help us transition to early fall mornings and short afternoons and wasn’t coming up with anything that got me really excited.

But then I was looking at those back-to-school shelves packed with cereal and it got me thinking about ways that we could enjoy it other than paired with milk. The idea for kid-friendly cereal “sushi” was born. 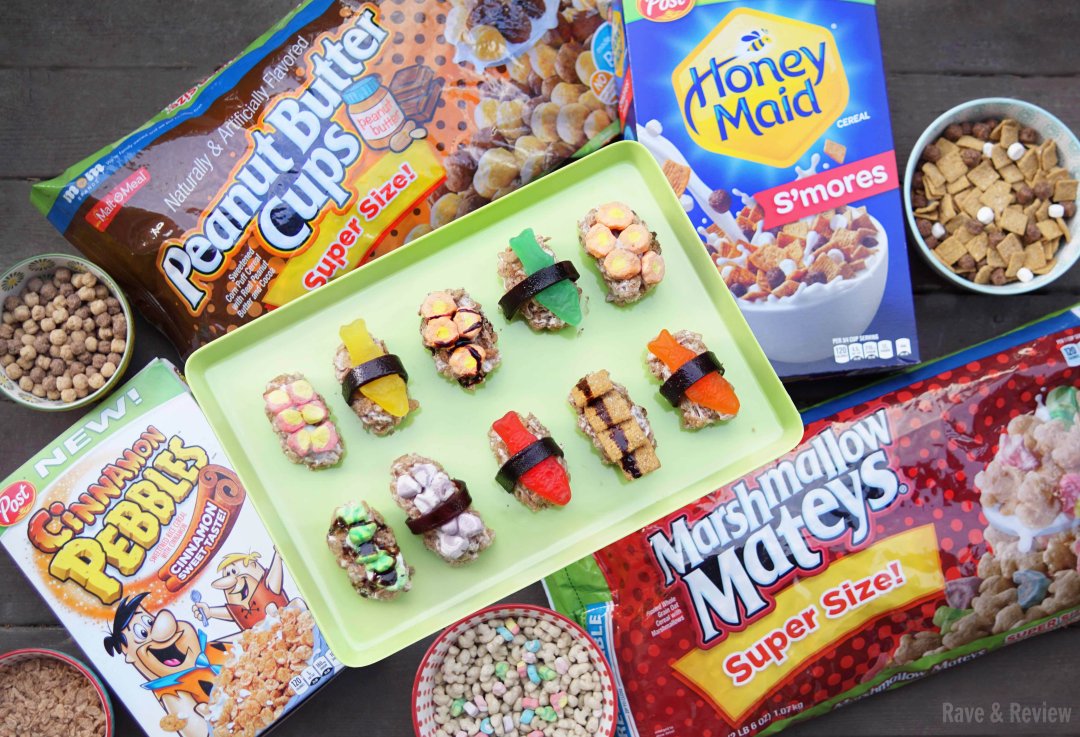 Want even more back to school recipes? Hover over the photo to shop these versatile cereals! Ready to make your own cereal sushi for kids?

Kid-friendly cereal “sushi” is fun because literally anything goes. You can make it with what you have on hand, make as many different types of “sushi” as you would like, and it’s fairly inexpensive so you don’t have to worry about how much doesn’t end up in the dish. Cereals are also great because the kids can really have fun with it, as well as being a great snack they can eat by the handful while they are getting creative in the kitchen.

Since I was working with young kids, I started by pouring our cereals into separate bowls to make sushi-making easier and keep them from reaching into all of our cereal boxes digging for treats. We used Malt-O-Meal Peanut Butter Cup and Malt-O-Meal Marshmallow Mateys® paired with Cinnamon PEBBLES™ and HONEY MAID® S’mores, but you can use any variety of Post brands – as I said, anything goes in cereal sushi! Next, we gathered marshmallows, chocolate syrup, gummies, fruit strips, and bananas for our types of sushi rolls we wanted to make. Then it was time to get creative.

For our first batch of kid-friendly cereal “sushi”, we went with a traditional nigiri {fish on top of a bed of rice}. Instead of rice, we made “sticky Cinnamon PEBBLES™”. Similar to rice crispy treats, we use a pat of butter and a handful of mini melted marshmallows added to Cinnamon PEBBLES™ until the mixture is just sticky enough to be formed into rice beds. Then we topped the Cinnamon PEBBLES™ beds with marshmallows from the Malt-O-Meal Marshmallow Mateys® cereal, HONEY MAID® S’mores cereal, and Malt-O-Meal Peanut Butter Cups, using melted marshmallows to hold them together, if necessary. The kids added in some gummy fish for extra fun, and then we wrapped some with fruit strips {for nori, or seaweed wraps} and chocolate syrup {for a teriyaki or soy sauce look}. For our next type of sushi, we went for a uramaki roll {rice on the outside}. We started by rolling a banana in white chocolate syrup to get it sticky. Then we rolled it in Cinnamon PEBBLES™ for a rice-like look, smothered it with various cereals and then added a drizzle of chocolate syrup on top, similar to a Dragon Roll. We then sliced the uramaki into bite sized pieces. Our next roll was a take on the California Roll. Just like with the previous roll, we started with a banana rolled in white chocolate syrup and then in Cinnamon PEBBLES™. After the banana was covered in Cinnamon PEBBLES™, we cut it into bite sized pieces and laid them down on the plate.

The kids then decorated them with cereals and a choco, late drizzle and they were ready to eat. The best part about cereal sushi is getting creative with the kiddos. They had a blast making their own creations, but the allure of eating it all eventually won out. The kids couldn’t wait any longer to devour their cereal sushi, and I couldn’t blame them. This isn’t surprising considering our sushi contained just about all of their very favorite foods. We all had so much fun making and eating our sushi creations, and the kids have already requested another cereal sushi day in the near future. I’d love to do it next time as a larger group with friends, as it would be a great playdate activity and snack all rolled into one {pun intended}. It would be fun to try to make even more different kinds of rolls and let the kids do their own sushi restaurant here at the house.

Stock up for kid-friendly cereal sushi

Are you ready to head to Walmart to stock up on cereals so you can make your own sushi? Post Consumer Brands has a cereal for everyone in the family, and now’s the time to score all those back to school stock up deals. During fall it feels like I’m constantly spending money on school supplies, lunches, and all the expenses of back to school, so I love that Post cereals are such a great deal. This was our first time trying Malt-O-Meal cereals, and I must say that I’m a fan. I got two HUGE 38oz. bags of cereal {that’s 36 whopping servings!} for what I would normally pay for one medium sized box that we would fly through in a week or less. And, not only are they huge, they also have a guaranteed great taste {details on pack} with over 33 varieties that appeal to everyone in the family, all with no high-fructose corn syrup. Want to remember this recipe for later? Be sure to Pin it!