As you know, we're huge American Girl fans around here. So, whenever the brand debuts something big, we get lots of messages and questions asking about the new products. Such was the case this past month when American Girl introduced the new WellieWishers line to their already full product offerings. If you've been wondering about the line and excited to learn about the new dolls, this is the post for you. American Girl describes the WellieWishers as a sweet and silly group girls that are helping kindness and friendship bloom. The line has 5 main characters: Willa, Kendall, Ashlyn, Emerson, and Camille. Each friend brings something unique to their group, but they all have the same common goal: to be a good friend. To better understand each others' perspectives, they are encouraged to take a step in each others' wellies {aka boots}, a spin on the idea of "taking a walk in each others' shoes".

Their signature wellies and their flair for fashion make them really popular with both kids and adults. Every time we've visited the Seattle store since their release, the WellieWishers area has been swarming with parents and girls picking out their favorite doll while fawning over the cute accessories and fun details. And, I can't really blame them, the line is adorably enticing. This little girl is WellieWishers obsessed, and her sweet Willa doll has become a beloved friend this summer. In her words, "Willa is a nature girl, like me, and she loves adventures." Willa is absolutely adorable in pictures, but in person she truly sparkles. Her eyes have such depth to them, and I think it's impossible to not fall in love with her red hair and her bunny ears. The WellieWishers line has a lot on common with their signature lines {the BeForever, Girl of the Year, and the Truly Me line of dolls}, including the quality and craftsmanship that goes into each doll, and the fun accessories and outfits. But, they also have some big differences, too. For one, they are marketed towards girls ages 5-7, an age group that until now largely fell in between their 18 inch lines and their Bitty Baby collection. 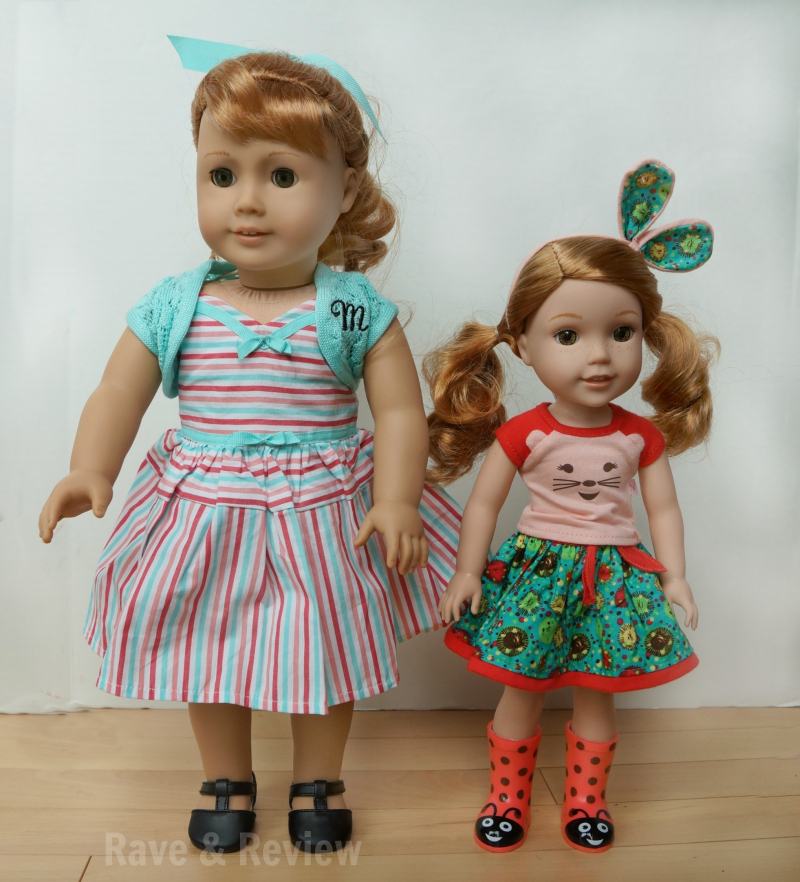 The WellieWishers dolls are also smaller and shorter than their other lines, which makes them ideal for younger children. They have all-vinyl bodies instead of soft bodies, and have fixed eyes that don't open and close. They also have painted on eyelashes and eyebrows, as well as wig hair {instead of rooted}. The hair also isn't as thick, which makes it easier to care for.

And, while all of these things make them perfect for young girls, my daughter would like everyone to know that while the line is intended for ages 5-7, they are very popular with the older group, too. At 8 years old, she alternates between whether she favors WellieWishers or 18 inch dolls, but the one thing she never wavers on is that she loves American Girl dolls. Her younger sister, however, is all about the WellieWishers line and one of her very first words she ever spoke was "Willa" and she continues to adore that doll more and more every week. Want to see an in-depth look at Willa in the WellieWishers line? Check out this video my daughter did with her new video program.

My daughter got a sneak look at the three new WellieWishers books that are due out this fall, and now she's an even bigger fan of the line and her beloved Willa. She devoured the books in an afternoon and has already been asking to find out more about their stories. I love that these special dolls got her excited about reading this summer, and while she is having fun reading, she's also getting a great lesson in compassion and the true meaning of friendship. As much as we still adore the full size dolls, there is something undeniably special about the WellieWishers line, and their fans are already very loyal. Speaking of which, the WellieWishers also have their own Instagram account, which you should definitely follow so you can see all their adorable-ness.

2 thoughts on “Introducing the WellieWishers line at American Girl”