It started innocently enough with one My Little Pony: Friendship Is Magic video on the LeapPad, and ever since then my kiddos have been very big fans of everything Equestria.  So, it’s no surprise that they were smitten when they were introduced to the line of My Little Pony toys from Hasbro a few months ago.

Since that day, they have been playing non-stop with their My Little Pony friends {or “Pones”, if you’re my 2 year old son}.  They set up MLP weddings, they host galas, but most of all, they play nicely… and quietly… together for hours like this: 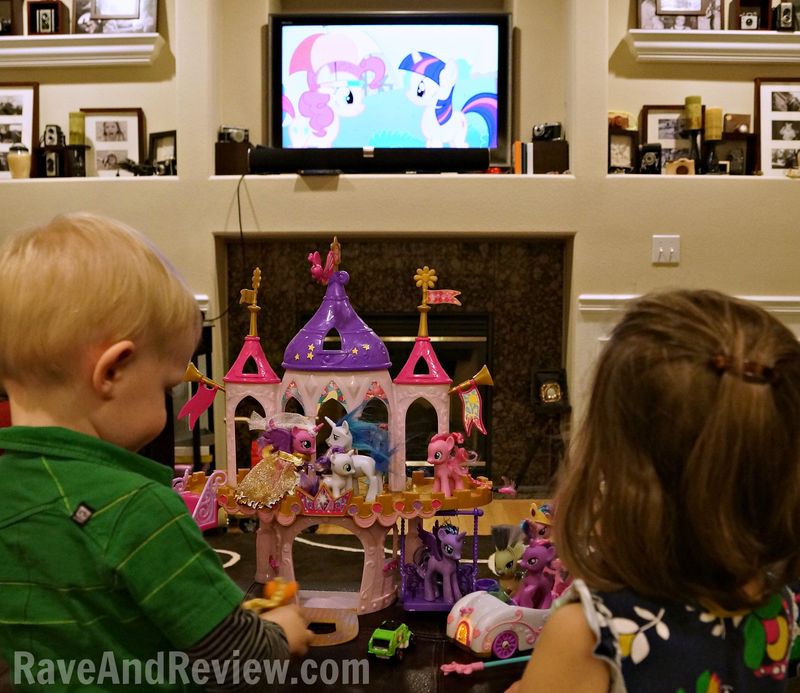 There’s really only way to describe how much they love their Ponies and that would be BPFF {you know, Best Pony Friends Forever, if you're a MLP fan}.  Anyone who knows my unicorn and horse loving daughter would understand that My Little Pony would be a huge hit with her, but what was surprising to me was how much my son adores them as well.

Clearly I have a Brony in the making, and I don't mind a bit. And, really, who can blame him when our ponies come with their own RC cars and working trains?  Add in the fact that “his” pony has a mohawk and glows in the dark, and it’s a recipe for Brony love.

But, even more shocking than my son loving MLP is that I am quickly becoming a My Little Pony fan as well.  Anyone who knows me and my adversion to character toys, and especially pink ones, is likely shocked at this, and the truth is that I was, too.

As it turns out, the show is actually pretty funny and it’s one of the few programs we have all given our stamp of approval.  I love that there are bits of humor that work for all the different age groups in our family mixed into stories that focus on friendship, loyalty, and just how to be a decent person.

Of course, there’s also rainbows and magic along with horses, Pegasus and unicorns, so really, the show’s for everyone.

We recently got to check out My Little Pony: Friendship is Magic – Pinkie Pie Party, and as I expected, it did not disappoint.  Instead of a full-length feature, the movie is broken down into different episodes, which are perfect length for watching one before naptime or for watching them all in a row for our bi-weekly movie nights.

Far and away the favorite episode is "Too Many Pinkie Pies", which my daughter absolutely loves.  Maybe this is because she actually has two Pinkie Pies {one was bought separately and another came in a playset}, or maybe it's that she loves pink, but whatever the reason, this is her favorite episode to watch next to the MLP royal wedding. A big thank you to Shout Factory and Hasbro for sending Pinkie Pie Party and Twilight Sparkle in an RC Car to facilitate this review.  As always, all opinions are 100% ours.

3 thoughts on “My Little Pony: Friendship Is Magic… and so is playtime”