I've been looking at the door and thinking I needed a new wreath for a while now, but every time I would see one in stores I would do that thing where I would talk myself out of it, convincing myself that I would make one instead. I finally made it to the craft store last week and was kind of bummed at the wreath form selection. I didn't love the green or white styrofoam mold, the hay-looking wreath is not really my style, and the wire ones weren't right for the wreath I had in mind. So, I ended up leaving the store empty handed {you know, besides the bags of crafts supplies I bought for my 200 other projects I'm perpetually working on}.

Then, today I decided to clean out under the entryway drawers and found a stash of frames I was going to use for our art wall that I had completely forgotten about. This was in large part because the frames all had a pretty big asterisk on them because they needed some pretty major work {i.e. glass missing, hooks broken, wrong color of paint, etc}.

But, at the bottom of the pile I found a really nice faux wood oval frame with the glass and back missing and inspiration hit. It wasn't more than 15 minutes and I had turned it into just the wreath I had been looking for, and it didn't cost me a single thing because I had all the supplies I needed just waiting to be repurposed! 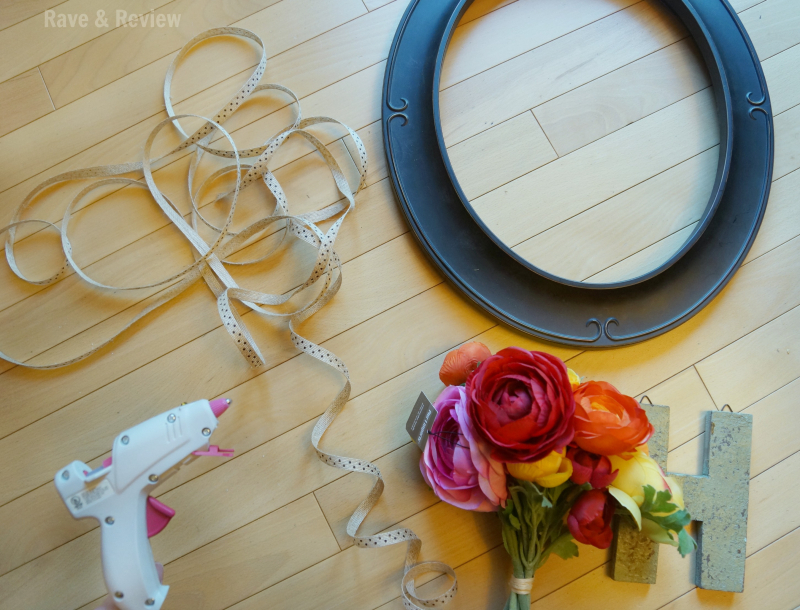 I simply removed some of the buds from the bouquet and laid them out on the frame until I liked the arrangement. Then, I removed them and laid them on the floor in the correct pattern as I worked on the ribbon. I could have cut off the wire innards of the flowers at this point, but I decided to leave them to make them easier to attach to the inner ring of the frame.

Then, I started gluing the burlap ribbon to the inside of the frame using a hot glue gun, lining the interior oval of the frame. I did this for a fun contrast to the dark frame as well as to give the flower wires somewhere to grip for a little more stability once they were glued down. After the ribbon was glued down, I stuck the flowers wires into the still-warm glue, added some more glue at the base of the bloom, and then glued down the wooden letter in the center. The last step was adding a curly-q of the burlap ribbon for a little fun contrast the the flowers. Crafts really don't get any easier than this, friends. Even with the gathering of supplies for this project, it all came together in less than 20 minutes, which is much less time than it would have taken to drive to the store with three kids. Just minutes of gluing and designing and this was ready for admiring. Have you ever used a frame as a wreath? I'm all excited to turn the rest of the discarded frame pile into presents for friends and family and would love some inspiration!