It’s a big time in our house! Baby girl has finally reached a really big milestone: she outgrew her infant seat and it’s now time to switch her to a rear facing convertible seat.

But, the problem is that we have three young children in car seats and we own a compact sedan. Knowing what a tight fit the infant car seat had been, I was dreading moving her to an even bigger seat because it was clear it just wasn’t going to work. We looked into numerous convertible seats to transition her to, but they were all just too big.

It began to look like we had two options: 1) buy a new car, or 2) switch my almost 6 year old to a booster seat. Obviously, neither option appealed to me. So, I began to research anything and everything to fit three across in our compact sedan.

When I found the Britax Frontier ClickTight, I realized that it just might be the best of all worlds – a 5 point harness that converts to a booster seat and is slim enough to fit in a compact car easily. With the dimensions of 19" W x 36" H x 21" D at its maximum and only 28” H at minimum, it’s one of the slimmer car seats we found anywhere, and by far the slimmest with the features we were looking for. Add in the fact that it converts and can be used by my son until he no longer needs a seat and it’s the clear choice.

As soon it arrived, the kids went crazy celebrating their “big switch”. Sorry, baby girl. This is your brother’s seat. Your new-to-you Britax convertible seat will hopefully be just as exciting.

While hubby was removing seats, or as we call it “playing car seat Tetris”, we practiced buckling in on the porch. As you can see, this little guy is super excited about his new seat. He says it’s “super comfortable” with the premium fabrics and padding and the fact that it reclines. And, after a few weeks of riding in it, he says it’s “the best seat ever.” I’d call that a ringing endorsement. But, honestly he’s not the critic that really matters. That title goes to my husband, the installer of the car seats and the reader of safety ratings. Before I could even ask him how he liked the new seat, he started raving about it. We’ve never had a ClickTight product before, and according to him it’s basically the best thing that’s happened to car seats since he’s been installing them. Not only did the Britax Frontier ClickTight fit perfectly even in our cramped conditions, it was also so easy to install correctly with the push of a button with no need to rethread the harness. Just open the front of the car seat, buckle the seat belt across and click the seat shut. That’s it. Whereas wrangling in car seats normally requires a good chunk of time and the understanding that you will be sweaty and mad when you are finished and the seats are all locked in tight, the ClickTight installation was like a dream. It's seriously this easy:

And, like the name implies, it is clicked in so rock-solid that you know it's not going anywhere. Whereas with other seats we literally have to kneel into and then ratchet them down until they don’t wiggle, the ClickTight seat locked down with just a click and it was far more secure than I ever could have imagined. I know that a car seat is only truly safe when it’s installed correctly and I also know that up to 75 percent of car seats have been found to not be installed incorrectly, so to me the ClickTight Installation System is the best thing ever when it comes to keeping little ones safe. By making it so simple that literally everyone can do it, it means that those seats that parents are buying because they love the safety ratings will actually be as safe as they should be.

The one downside of all this solid construction is how heavy it is; at 25 pounds it’s substantially heavier than a traditional seat and it’s a workout to carry it anywhere for long distances. But, this is only a problem if you are moving seats from car to car frequently or using it for plane travel, both of which aren’t issues for us. And for us, knowing that our son is properly secured is worth any extra weight that the ClickTight system adds. Not only am I so happy that my son can stay in a 5 point a little longer, I love that the Frontier ClickTight has so many safety features built in like the SafeCell Impact Protection, an impact-absorbing base and steel frame, and a V-shaped tether to minimize seat rotation and staged-release stitches that slow and reduce forward movement during a crash. 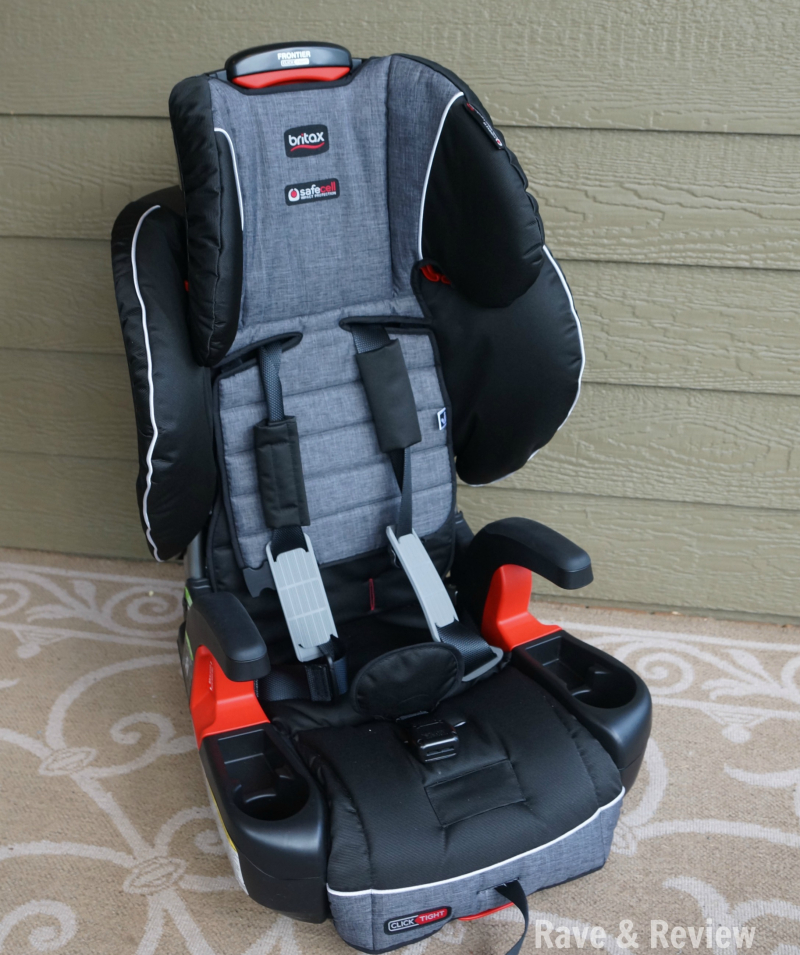 And, because it’s a Harness-2-Booster seat, when he's ready it will convert to a booster and we won't have to invest in yet another seat. From preschool all through the elementary school years, it’s the last seat he will ever need.

As he grows, the easy-adjust harness grows along with him with 9 different positions – just change the height of the seat with the push of a button. If you thought they couldn’t make all these grow with you functions any easier – they did. By making the transitions between harness and booster only a few seconds to convert, it means that you can use the seat for multiple ages of children on the go. Simply tuck the straps into the interior of the seat and it’s converted – no need to unthread the harness. How awesome is that?

Speaking of safety, Britax is helping parents aware of heat safety just in time for the hot summer and fall months. Hearing of heat related deaths and injuries is always heart breaking, and I love that they are helping spread awareness to parents and caregivers. I had no idea that the inside temperature of a car can raise 20°F every ten minutes, and can easily exceed 100°F in half an hour. That's truly frightening, which is why they are urging those who are in charge of children to "Look Before You Lock". Click on the infographic below to see more tips. Want to find out more about this amazing seat and the ClickTight system? Check out the Britax site and see all the other fans raving about the Frontier ClickTight Harness-to-Booster.