If you love Monsters, Inc. as much as we do then you’ve likely been dying to see the new Monsters University for yourself. Instead of a traditional sequel as we’re used to, Disney*Pixar has gone the opposite route and have introduced a prequel to the uber popular Monsters, Inc. The new movie fills us in on everything that came before Boo and tells how Mike Wazowski and Sulley met. Taking place at the prestigious Monsters University {MU}, Mike and Sulley meet in the elite Scare Program that Mike has been dreaming of his whole life.

But, the academic life Mike always dreamed of is derailed almost immediately when the pair's competitive spirit gets them both kicked out of the University's elite Scare Program. They find themselves at odds over and over again and hilarity ensues. I love how this movie takes a real look at relationships and how sometimes your first impressions are not correct. By showing how these two have obviously misjudged each other and have to get past these misconceptions they had about each other, it’s a great lesson for kids showing why they shouldn’t judge others so quickly.

The lesson about how great things can come from working with others you would prefer not to is an important one, and one I hope my kids take to heart. The group in Monsters University may be a hodge podge bunch of misfits, but they show that believing in each other and working towards a common goal can benefit them all. I honestly didn’t expect to take away so many life lessons from an animated movie about monsters, but I guess that’s the magic of Disney*Pixar. It may be a fun show about crazy antics and fun nods to pop culture, but it also is an important film that has real life lessons about growing up.

I won’t ruin the ending or say how they scored what looks to be the coolest jobs ever at Monsters, Inc., but I will say that the biggest lesson of the movie was a surprise to me. The road to superstar scarers wasn’t an easy one, but it has lots of laughs and a ton of heart. And, you can stay connected with the latest news and information about Monsters University on the Disney website and by connecting with them on Facebook and Twitter. 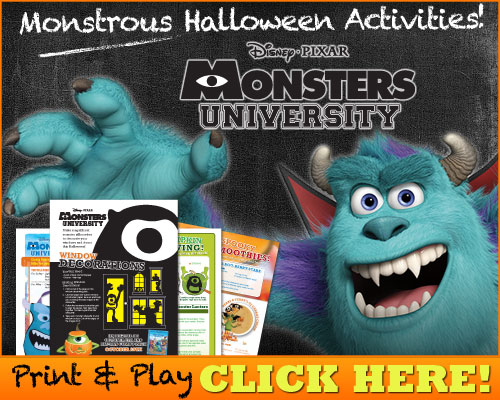 Bonus materials include:
•    Campus Life – What's it like being on a production crew at Pixar? Get a look at a day in the life of the “Monsters University” crew through their own eyes.
•    Story School – This documentary examines the challenges of creating a prequel as well as themes that run through the story, and the change in focus from Sulley to Mike.  We'll also look at how gags are developed – from writing jokes to brainstorming a million ideas, only 5% of which actually end up in the movie.
•    Scare Games – At Pixar, we play hard while we work.  The same people who keep the film production moving – producers, managers, coordinators and artists – are also the ones who bring spirit and excitement to some of our extracurricular activities. We check out the MU production teams as they go head to head in the mostly playful Pixar Scare Games competitions.
•    Welcome to MU – Sets aren't just buildings, they are the worlds our characters live in and explore.  This look at the Monsters University campus and its development is told from the perspective of the artists who created each piece of the campus from the architecture to the ivy leaves.  .
•    Music Appreciation – Randy Newman's scores are a mainstay of Pixar films, and this documentary will give you a privileged look at his creative process.  We follow the “Monsters University” scoring process from spotting to writing and on to the scoring session. including special college-themed recording sessions.
•    Scare Tactics – Animators are actors who digitally bring the characters to life. In this look at how the MU animation team worked, you’ll see their process of how they channeled their own monster-selves and created moments on screen that were really funny, really scary and also really serious, sometimes all at the same time.
•    Color and Light – How can a single painting set the tone for an entire scene? We'll look at the creation of the colorscripts and how they were realized technically in the final film.  Along with the process, this piece explores the many layers of technical innovation required to produce such a naturalistic feel.
•    Paths to Pixar – MU Edition – When one door closes, sometimes another door opens – one with an even more exciting opportunity behind it. Members of the MU crew tell their own compelling backstories and share the challenges they overcame along their paths to Pixar.
•    Furry Monsters: A Technical Retrospective – Explore the difficulties in creating characters that are 20 years younger with tools that are 10 years more advanced in this contrasting look at the differing technical challenges that arose when making “Monsters, Inc.,” and “Monsters University.”
•    Deleted Scenes – Four separate scenes – “Rivalry,” “Recon,” “Movie Night,” and “Drama Class” – are highlighted with an introduction from director Dan Scanlon.
•     “The Blue Umbrella” – This animated short film from Pixar Animation Studios, directed by Saschka Unseld and produced by Marc Greenberg, played in theaters in front of "Monsters University." “The Blue Umbrella” tells the story of an evening commute in which the rain starts to fall and the city comes alive to the sound of dripping rain pipes, whistling awnings and gurgling gutters. And in the midst, two umbrellas—one blue, one not—fall eternally in love.
•    Additional Bonus Features – Audio Commentary, Promo Picks, College Campaign, Theatrical Campaign, Set Flythroughs, Art Gallery and more!

A big thank you to Disney for providing a copy of the new film for review. As always, all opinions are 100% ours.